​When to Begin House Training Puppy

Experts recommend that you begin house training your puppy when he is between 12 weeks and 16 weeks old. At that point, he has enough control of his bladder and bowel movements to learn to hold it.

If your puppy is older than 12 weeks when you bring him home and he’s been eliminating in a cage (and possibly eating his waste), house training may take longer. You will have to reshape the dog’s behavior -- with encouragement and reward.

Steps for Housetraining Your Puppy

Experts recommend confining the puppy to a defined space, whether that means in a crate, in a room, or on a leash. As your puppy learns that he needs to go outside to do his business, you can gradually give him more freedom to roam about the house.

When you start to house train, follow these steps:

Keep the puppy on a regular feeding schedule and take away his food between meals.
Take puppy out to eliminate first thing in the morning and then once every 30 minutes to an hour. Also, always take him outside after meals or when he wakes from a nap. Make sure he goes out last thing at night and before he’s left alone.
Take puppy to the same spot each time to do his business. His scent will prompt him to go.
Stay with him outside, at least until he’s house trained.
When your puppy eliminates outside, praise him or give him a treat. A walk around the neighborhood is a nice reward.

A crate can be a good idea for house training your puppy, at least in the short term. It will allow you to keep an eye on him for signs he needs to go and teach him to hold it until you open the crate and let him outside.

Here are a few guidelines for using a crate:

Make sure it is large enough for the puppy to stand, turn around, and lie down, but not big enough for him to use a corner as a bathroom.
If you are using the crate for more than two hours at a time, make sure puppy has fresh water, preferably in a dispenser you can attach to the crate.
If you can’t be home during the house training period, make sure somebody else gives him a break in the middle of the day for the first 8 months.
Don’t use a crate if puppy is eliminating in it. Eliminating in the crate could have several meanings: he may have brought bad habits from the shelter or pet store where he lived before; he may not be getting outside enough; the crate may be too big; or he may be too young to hold it in.

Signs That Your Puppy Needs to Eliminate

Whining, circling, sniffing, barking, or, if your puppy is unconfined, barking or scratching at the door, are all signs he needs to go. Take him out right away.

Accidents are common in puppies up to a year old. The reasons for accidents range from incomplete house training to a change in the puppy’s environment.

When your puppy does have an accident, keep on training. Then if it still doesn’t seem to be working, consult a veterinarian to rule out a medical issue.

Do's and Don’ts in Potty Training Your Puppy

Keep the following do's and don'ts in mind while housetraining your puppy:

Punishing your puppy for having an accident is a definite no-no. It teaches your puppy to fear you.
If you catch your puppy in the act, clap loudly so he knows he’s done something unacceptable. Then take him outside by calling him or taking him gently by the collar. When he’s finished, praise him or give him a small treat.
If you found the evidence but didn’t see the act, don’t react angrily by yelling or rubbing his nose in it. Puppies aren’t intellectually capable of connecting your anger with their accident.
Staying outside longer with puppy may help to curb accidents. He may need the extra time to explore.
Clean up accidents with an enzymatic cleanser rather than an ammonia-based cleaner to minimize odors that might attract the puppy back to the same spot. 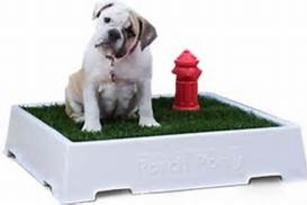 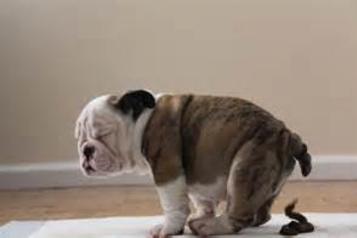